Frank Balaam works on "View From Shadow Mountain," a piece he was commissioned for in Oct. 2013, at his studio. Photo by Jenn Walker
Home » Arts & Entertainment » Local artist Frank Balaam discusses his ever-evolving work

If you are a fan of Frank Balaam’s work, you are probably most familiar with his magical trees. Pulsing with energy and calm at the same time, the Globe artist (originally from the U.K) brings trees to life on canvas with an explosion of color.

In fact, you wouldn’t know it, but your eye will vibrate from the visual excitement of looking at his paintings. Supposedly this happens when an eye detects opposing colors next to each other, Balaam’s wife Nora explains.

Unless you knew Balaam in the ‘80s, you probably haven’t seen his lesser-known paintings, though, which are currently on display at the Jim Coates Gallery in Miami. The 17-piece exhibition, “Evolution of A Style,” features framed and restored pieces that Balaam created shortly after his arrival to the States in 1981. Unlike his trees, a number of these paintings depict people  – in Manhattan streets, on subways, and in markets – using airy strokes and subtle pastels.

“These are ordinary people,” Balaam says. “It is a simple social studies experiment, not glorifying anyone.”

Perhaps the most treasured piece in the exhibition is “Angela.” It is the first you will see when you enter Jim Coates’ gallery, hanging to the right of the doorway, illuminated by natural light.

The portrait is of Balaam’s sister Angela, who passed away just a few years ago. She was autistic. One of Angela’s gifts was her ability to hear songs on the radio, and pick up the accordion and replay them. Because she was autistic, though, her hands were very small – so small that she could never perform.

Society has a tendency to undervalue things and people, Balaam says over tea and scones. People undervalue the handicapped as much as they fail to value every heartbeat within their very own bodies.

In response to this tendency, Balaam founded a company in Globe-Miami that employed disabled people to create unique folk art furniture in 1986. He named it Angela’s World, after his sister. His company was very successful in its ten years of operation, distributing pieces worldwide.

After Angela’s World, Balaam continued to explore American society through art, sketching and painting the homeless, as well as jazz musicians. It was after he lost more than 1,000 of his original paintings and drawings to the fire at the Pioneer Hotel in downtown Globe, however, that his focus shifted to such bold colors, like the ones he now uses to animate his trees.

Though you won’t find humans amongst Balaam’s trees, his paintings are very much about people and society, he says. There are more colors than you can count within any one the paintings; he intentionally covers every inch of white space on the canvas. At the same time, he will never overlap any two colors.

Just as he sees every person with value and a purpose, “I want each color to have its moment and purpose on the canvas,” he explains.

“Evolution of a Style” will remain on display through February 23, 2014 at the Jim Coates Gallery in Miami. To learn more about Balaam and his work, click here.

Share
Previous Robert S. Ashford, 69
Next Marriage can be a real killer 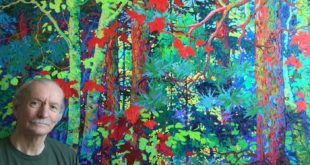