Cali Mayfield, 13, wakeboarding at Roosevelt Lake, where her family has a second home in Lakeview Park and spends weekends on the water. Courtesy photo
Share

Roosevelt Lake is the largest lake within the borders of Arizona. Located just 30 miles from downtown Globe, 80 miles east of Phoenix, and 150 north of Tucson, it’s the place to go for folks wanting a wet way to beat the summer heat.

“Two and a half hours door to door, it’s a really easy trip up here from Tucson,” says Kim Turk. “I make Globe part of my journey – for lunch, to see friends, to shop.”

She takes the trip monthly during the winter and more often during lake season, which runs approximately May 1 through the end of October — though many lake lovers also spend Thanksgiving there. Semi-retired, Turk often comes up mid-week and stays anywhere from two to five days at a time. She stays at her mobile home in Lakeview Park, at the lake’s southern end.

Activity at Roosevelt Lake, the marina and Lakeview Park, she says, has boomed.

Get Away from Congestion

“Covid has encouraged people to get out of the city and congestion and work from home,” says Margaret Rambo of Rambo Realty. “Many are moving onto property they already own.”

Rambo has worked the Roosevelt Lake real estate market for 42 years. She says demand is high now, but there are “fewer listings than ever.” The age and individuality of the properties makes them difficult to price and compare.

“We try not to get too crazy with our prices,” Margaret says. “We don’t see bidding wars like in the Valley and some parts of the country.”

Californians are coming to Arizona – including retirees and younger people working remotely – and driving real estate prices up. But they’re mostly moving to Scottsdale, Pinetop, Show Low, and Strawberry Basin.

“People have always come from out of state for the fishing, the trails and the open state, but we don’t have the services that people from out of state want,” Margaret explains. “What I see is the Arizonans moving out of the city and coming here…trying to escape the growing crowds.”

Land with the flexibility to park an RV fetches the highest price, according to Rambo, and the latest trend is the “barndominium” — a big metal garage for the boat, RV, side-by-side, and jet skis. Some are built with a one- or two-bedroom apartment inside.

Get Away from Development

“There is no private land on the lake,” Margaret says. “That’s by design.”

Roosevelt Lake lies within the Tonto National Forest, and facilities located near the lake are managed by that authority.

“You can’t build homes there,” Kim Turk says. “There’s little for sale, and no slips available for rent at the marina. There’s a waiting list.”

Lakeview Park — a community as close to the lake as you can get — has 185 rental spaces. Its convenient location, near the center of the lake’s southern shore, provides easy access to Tonto National Monument and the Apache Trail Scenic Byway. The RV park sits on land leased from the Tonto National Forest. Originally built in the early 1970s, it comprises 174 manufactured homes and 11 RV spaces. People own their homes but rent the space.

“The early single-wides just keep getting remodeled because they’re too old to move,” Rambo says. Counties have restrictions about moving models older than 1977, when HUD began standardized inspections.

“People are spending a lot of money renovating trailers,” Kim says. “Some of them are just stunning. They don’t even look like mobile homes.”

As the owner of a large home in Tucson, Kim never thought she would want a vacation home.

“I want to travel all over the place,” she says.

Turk moved to Arizona in 1985. A California kid, she missed the ocean and enjoyed going to Roosevelt Lake, the closest body of water. At 30, she started a coffee business, and then she had a son; there was little time for lake life.

Decades later, as the pandemic took hold, with the business winding down and her son grown up, Turk returned to Roosevelt Lake and stayed in a friend’s trailer at Lakeview Park.

The first trailer that came up for sale was a one-bedroom with a covered patio – perfect for Kim and her dogs, but too small to accommodate friends. She jumped at the opportunity when a three-bedroom, two-bath home came for sale. Her smaller trailer sold quickly, too.

“It’s an investment, but not such a huge one,” Kim says. “ I can button it up and have it sit here.”

Margaret Rambo and her husband have lived in the Tonto Basin since 1978. They bought their first lot at the northern end of Roosevelt Lake in 1973, on the other side of the creek.

“No one promised us a bridge,” Margaret says. Nearly 50 years later, bridge construction is expected to begin this fall.

Get into the Water

Down on the marina, million-dollar houseboats bob alongside humble fishing boats. Roosevelt Lake is home to bass-fishing tournaments that draw fishermen from all over the state. In addition to largemouth and smallmouth bass, fishermen sport channel catfish, flathead catfish, bluegill, crappie, and carp. One college graduate in his mid-thirties started winning tournaments, so he quit his job and, with prize money, bought an RV.

“It’s a relaxing atmosphere,” Kim says. “There are a lot of kids and teenagers here.”

Polly Mayfield began coming to Roosevelt Lake and Lakeview Park as a child. Her father drove a pontoon boat and grilled hot dogs on board. Today, Mayfield is a forensic scientist, and her husband, Elliott, a firefighter for the City of Tucson. They make the trip to Roosevelt Lake with their daughters, Cali, 13, and Ollie, 5, as often as their schedules permit.

“On Thursday we grocery shop and clean the house, and on Fridays, after school we head up here,” Polly says.

“I’d rather be here,” Cali says. “Wakesurfing is my sport.”

Elliott drives the boat, and he loves doing it. He turns serious about boat safety as the lake enters peak season. With more traffic from residents and tourists, you have to expect some of them to have less experience or rusty skills.

“It’s so busy,” Elliott says. “Once there are a lot of people, you should make etiquette a priority.”

There have been six deaths at Lake Pleasant this spring, motivating more Phoenix-area folks to make the drive to Roosevelt Lake.

“I have jet skis, and my son loves them and he brings his friends up,” Kim Turk says. “You have to be careful.”

But among the lake’s denizens, there’s a feeling of care and consideration. When big storms come in, Elliott Mayfield says, people look out for each other. Those capable head to the marina and help get the vulnerable boats out.

Elliott had never been to the lake before he met Polly. Happily, he loves the lifestyle and the commitment it requires. When Polly’s father died unexpectedly and her mother was ready to sell their mobile home, Polly and Elliott stepped up to buy it. For Polly, it’s filled with childhood memories of Roosevelt Lake.

“We’re going to work on it together, slowly but surely,” Elliott says.

They’ve painted the cabinets, redone the floor, and bought new furniture. On the outside, the house has fresh paint, new windows, new skirting, and a spruced-up front porch. Elliott took the pontoon to the fire station and, with help from his friends, rebuilt the boat. When it was complete, they celebrated by grilling hot dogs for everyone.

Many members of the Lakeview Park community coordinate to celebrate birthdays and holidays. They have dinner at each other’s places and cook their own food down at the dock. Everyone looks out for each other’s kids.

“When people are here, everyone’s on vacation. So you’re kind of in a good mood,” Kim says.

Everyone has something to offer: Fishing boats. Surfing boats. Paddleboards. Over the summer, the part-time neighbors meet up in a cove and tie their boats together. The kids swim. People wave.

“No one is on their phone,” Polly Mayfield says with a smile. “The service is terrible up here.”

No one seems to mind. There’s wifi at the marina.

“The world is smaller,” Elliott says.

Cali celebrated her thirteenth birthday with two friends from home – and all of the family’s lake friends. They held a big BBQ block party, complete with cake and piñata.

“Not everyone can do what we do,” Elliott says. “It’s nice to be able to do this for our kids and keep them close.” 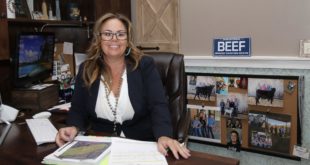