A view from above Jacob’s K9 Field of Dreams, where local dog trainer Amanda Haas is creating a training facility that will be used by local kids involved in the Gila County 4-H dog project. All photos by LCGross
Share

On a recent crisp and sunny November morning, on a ridge near Globe that gives a spectacular view of the Pinal Mountains, Amanda Haas is in her element: surrounded by well-behaved dogs trained by owners who’ve devoted untold hours to the effort.

“I love the dogs, and nothing gives me more joy than seeing people’s faces when they can communicate with them,” says Haas, a dog groomer in Globe for more than a quarter-century. “It literally brings me to tears every time I see them build that trust. I don’t think there’s anything better, to be honest.”

A life devoted to dogs … and everything else

Haas’s relationship with dogs goes back to her childhood, when she would visit her grandfather in New Mexico. He had a contract with the state’s department of game and fish to provide dogs to hunt stock killers – predators that feed on cattle, sheep or even small children.

Those early interactions with trained animals stuck with Haas throughout her life, and in 1996, she founded Animal Magnetism, a full-service grooming facility that enjoys an almost cult-like following among local canine aficionados.

Along the way, Haas has enjoyed a very diverse career: 17 years as a Globe firefighter, a stint as a process server, and nearly a decade as a personal fitness trainer. She also uses her degree in accounting – one of many she’s earned – to help her husband, Tim, in his business, EarthQuest Plumbing.

She would often bring a pie along when she served or help people find services, because in her mind “everyone deserves respect” and kindness. She also applies kindness and respect in her approach to animals and their owners.

Her work as a firefighter, from 1995 to 2012, gave Haas a chance to use her skills with animals. She saw up close and personal some of the amazing things dogs can do.

She went out on many calls with Globe Fire Marshal Joe Bracamonte and his arson dog, a Belgian Malinois named Evo, who was brought to the scene of fires to help determine the source of the blaze.

“It was amazing watching that gift and that training. That dog could detect one drop of a fuel source out of all those ashes,” she says. “It’s really humbling to see them work like that.”

She was also a resource for local law enforcement agencies that would call on her when animals were involved in vehicular accidents. She would calm the animals and sometimes care for them when the owners couldn’t.

Last winter, Haas even worked with a woman whose dogs specialize in finding bedbugs for landlords, tenants, home buyers and hotel owners in the area.

While she still does the books for EarthQuest, Haas’s life has become more and more dog-centric in recent years.

At the height of the COVID pandemic, she completed an intense four-month training at Starmark Academy for Professional Dog Trainers in Hutto, Texas.

“The Academy was brutal,” she remembers. “It was Texas in the summertime, and we literally trained dogs twelve hours a day, seven days a week.”

Haas was allowed to bring her own dog, Bindi – whose side gig is acting as a therapy dog for the Globe Police Department – but she also worked with two assigned dogs. At the end of her schooling, she came home with a certification as a professional dog trainer.

She also brought home another dog – she’d saved him from being euthanasized due to his behavioral problems.

Ry, short for Rhino, is an American Staffordshire Terrier/Neapolitan Mastiff mix who’s very aggressive – he wears a special vest to warn away uninvited petters – but in Haas’s hands, he’s almost docile and able to be among other dogs and people.

“Dogs don’t lie,” Haas says. “Consistency is key, and if you’re not consistent, you won’t see any progress. Rhino is a prime example of what training can do.”

Last February, Haas’s son Jacob died in a backhoe accident, four days before his 26th birthday. Jacob was a Tri-City Fire District firefighter and loved dogs as much as his mother does.

Jacob owned the property near Globe, with the view of the Pinals, where I met Haas. After consulting with her family, Haas offered the half-acre property to be developed into a 4-H training and show facility. The work is being done by the Haas family and an army of 4-H volunteers.

“I knew those kids were training up behind Living Waters Church and there just wasn’t enough room,” Haas says. “I was already actively looking for a place to have an agility field, so I said, why don’t we do what we can to build this up for the 4-H club?”

The Southern Gila County 4-H Leaders Council has been investing heavily over the past two years to equip the local club’s dog project. That includes refurbishing donated agility training equipment and a trailer to haul it.

The project was founded roughly six years ago by Tractor Supply manager John Monsees and his wife, Malissa, according to Carol Ptak, a local rancher and owner of Gryphon Ranch. Ptak has been involved for about a year and a half.

Through 4-H, young people learn about behavior, nutrition, dog structure and breeds, as well as multiple facets of behavioral training, including leashing and teaching a dog to heel, sit, stay and come when called. After that comes agility training, where the dogs learn to run hurdles, tunnels and jumps.

The culmination of their training every year is a signature event at the Gila County Fair in September, which participants prepare for from the beginning of October.

Ptak helps Gila County 4-H director Renee Carstens, who oversees the statewide program, and Ptak recruited Haas to participate. Back in September 2021, Ptak asked Haas to judge an event for the program, and Haas was naturally drawn in.

“I helped Malissa with the training side of it, and then as their kids aged out, sort of took over,” Ptak says. “I convinced Amanda to get involved, and she’s been an incredible resource for our kids.”

According to Ptak, the Gila County dog club is the largest section in local 4-H and is currently the largest in the state, attracting more participants than even Pima, Pinal or Maricopa counties.

She says even in an agricultural and ranching community, there are many kids who aren’t interested in raising livestock, and students in town often don’t have the space.

The Gila County dog project has become influential enough that it hosted the state dog clinics in October, bringing teams from five different counties to Globe.

Ptak says many programs in the state are led by people who lack experience in handling dogs, which adds to the value Haas brings to the table.

“Our program is unique because of the amazing talents of Amanda Haas,” Ptak says. “Amanda brings a long history of training every breed of dog and is nationally certified through the Starmark Academy. The dog group members have seen such improvements in their own dogs, as Amanda has helped them through many behavioral issues.”

Animal Magnetism continues to be the center of Haas’s professional life, although she’s leaning more towards training than dog grooming at this point in her career. She says that’s partially due to the toll grooming takes on the body, from repetitive motion injuries to aches and pains from years of heavy lifting, and partially to the satisfaction she gets from nurturing relationships between canines and humans.

“I love the artistic part of grooming, but training is my absolute heart’s desire,” she says.

She gets help occasionally from her daughter Katie, who is a dog-whisperer in her own right and works with local veterinarians.

They operate a business based on kindness to the animals. Haas is undaunted by even the most aggressive of dogs that come into her business.

“When you groom, people just hand their dogs off to us, so it gives me a chance to train them,” she says. “We’re usually dealing with a dog that would rather do anything else than have clippers running all over it or a blow dryer in its face, so you basically have to train these dogs on how to act while being groomed.”

She won’t tie a dog down with a noose and says she’s only had to resort to a muzzle “maybe five times” during the more than 25 years she’s been in business.

Back at the property on that November morning, a number of people are on hand with dogs that had caused problems before Haas intervened.

They all have unique stories and express gratitude that they have someone like Haas in the community.

There’s Tabitha Owens, whose dog Daisy May came from a friend whose dog had an unexpected litter of puppies. Daisy May is now a grand champion through Gila County K9 Companion, thanks to her participation in 4-H.

Suzanne Padgett rescued her dog, Cody, from a wash. He then nearly died from Parvo. Training has enabled Cody to interact comfortably with other dogs and new people.

One of the most striking animals is Kai, a three-year-old Mastiff/Great Dane mix that weighs in at 175 pounds – significantly bigger than her owner, Charlotte Asrarynezami. After several attempts to find adequate training for the dog, Asrarynezami found Haas, and now Kai is a certified therapy dog.

“We tried PetSmart training, but Kai wouldn’t even go in the door,” she says. “But after we worked with Amanda for two weeks, the turnaround was amazing.”

Haas continues on her mission to make dogs better citizens through her business and her work with 4-H. Group training through Animal Magnetism costs $100 for four sessions or $75 for two one-on-one sessions. There’s a waiting list at the shop, and more information can be found at Instagram or on Facebook.

4-H also offers occasional training for American Kennel Club Canine Good Citizen certificates. The CGC program teaches responsible dog ownership and is designed to recognize dogs who have good manners at home and in the community. The 10-step test and resulting certificate may qualify the owner for home insurance discounts, and some landlords require a CGC for renting to people with pets. Information can be found at extension.arizona.edu/4h/gila. 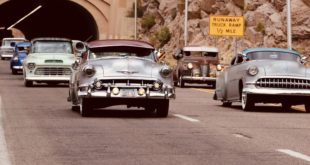