“Arizona is amazing,” says Tom Foster, executive director of Bullion Plaza in Miami. “Arizona is just this great repository of pretty much anything you can ever think of in the way of minerals. Not only stuff that is marketable, like copper and gold and silver, just all sorts of really neat things.”

Statewide, but particularly in Gila County, many of the gems and minerals in the area are quite literally brought to the surface by copper mining. As Wolfgang Mueller, curator of gems for Bullion Plaza, writes in a 2012 issue of Rocks & Minerals, “The geological processes responsible for the copper ore deposits have set much of the stage for the grand collection of gemstones found here.” Among the “grand collection” are azurite, malachite, chrysocolla, gem chrysocolla, turquoise, jasper, quartz, tourmaline, bohmeite, amethyst, apache tears, argillite, and jasper.

However, Foster offers a reminder that the minerals were there long before the mines. He recalls a story told to him by an Arizona archaeologist that  “wherever you find interesting minerals—wherever you find pretty rocks—you find a lot of early habitation.” The minerals had layers of significance to early inhabitants, “there was a religious connotation that went with it, there were elements of healing, elements of different energies and they appreciated that and they understood to a certain extent. This was long before we ever figured out crystal radios or the power of quartz.” Foster stops short of saying there’s an absolute correlation, but the connection is there.

Mueller tells GMT that “a lot of the minerals came out of these mines early as they were developing. As they progressed, the neat stuff is gone.” There’s a geological explanation for why things like azurite and malachite, for example, are found early in the life of a copper mine. Azurite and Malachite are formed by processes that took place roughly two million years ago, whereas chalcopyrite, the primary copper mineral, was introduced into the ground roughly 50 million years ago. In order to get to the chalcopyrite, you’re likely to encounter azurite and malachite.

According to Mueller, “you’re going to hit the azurite and malachite first and those have very high copper content. So with a relatively primitive melting process—I think actually if you know what you’re doing you can get copper out of that sort of stuff over your campfire.” At the beginning of the life of a copper mine, or when a pit is expanded, these secondary gems and minerals are more plentiful. Azurite is named for its azure blue color and, like malachite has been worn as adornment and also ground up finely and used as pigment for thousands of years.

Other minerals that the area is known for, such as jasper, are not so hard to come by. “We have a fair amount of jasper,” says Mueller. The jasper occurs in what is known as the Escabrosa Formation, which Mueller says is visible driving south from Globe to Tucson. “If you’re driving from Oracle to Globe in the Winkelman area and you get into the canyon, you see the bottom of that [jasper] exposed, which is all the reddish stuff.” Jasper usually contains some variation in color such as striations or spots.

Until 2012, the Sleeping Beauty Mine outside of Globe was world-renowned for its turquoise, which is also often a byproduct of copper mining. After forty years producing both copper and turquoise, the mine phased out its turquoise production. Before it closed it was the world’s largest producer of natural turquoise. Turquoise is still produced near Kingman, AZ.

Amethyst still comes out of the Four Peaks region and according to Mueller, “when you have the good stuff it’s as good as any you’ll find in the world.” Amethyst, a type of quartz, ranges from deep purple to a lighter lilac color. In addition to being used for jewelry, amethyst has been prized for its talismanic qualities throughout history.

Closer to home, there’s quartz and tourmaline in the Pinal Mountains, both of which occur in a wide array of colors. San Carlos is widely known for its peridot. Peridot is the name used for gem-quality specimens of the mineral olivine. It is one of the few gems that only occurs in one color, its signature olive green.

At the mineral hallway at Bullion Plaza in Miami, there are some “25 different specimens from the Arizona Historical Society and they’re all from Globe, Miami, San Carlos,” says Foster. Thanks to Jodi Brewster of the Gila County Gem and Mineral Society, the hallway also features an interactive fluorescent mineral display.

Area gems and more will be display at the Gem & Mineral Society’s 59th annual Gila County Gem and Mineral Show January 15th-17th at the Gila County Fairgrounds in Globe. The hours at 9 am to 5 pm Friday and Saturday and 9 am to 4 pm Sunday and admission is $3 per person or $5 per couple. Students and children get in free. In addition to dealers, demonstrations, and display cases, the event feature plenty of hands-on opportunities such as geode opening and jewelry making. Visit Gilagem.com for more information or call Jodi Brewster at 623-810-9780. 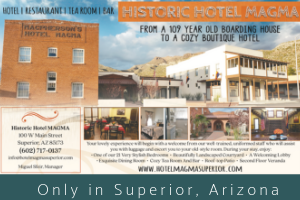