Pictured here, one of several boundary allotment fences destroyed by the Telegraph Fire, June 6, 2021. Over 66 miles of allotment boundary fencing will be replaced with funding received by the BAER pilot program. (Forest Service photo by Bain Grantham)
Share

Monica Ramirez-Andreotta of the University of Arizona Department of Environmental Science presented on a study currently underway on whether the floods in the aftermath of the Telegraph Fire caused contamination to soils, sediments or dust.

Ramirez-Andreotta is a professor of environmental science and public health at UA. She said after the post-Telegraph floods, area people had environmental health concerns related to pollutants that could have washed in with the sediments.

As a result, the Town of Miami and ADEQ reached out to Monica to conduct research on the question. The study is being funded by the National Institute of Environmental Health Sciences and the UA College of Agriculture and Life Sciences.

The end goal of the research will be to help the community prepare for future events.

Ramirez-Andreotta highlighted that the Pinal Creek area already has contaminants that could pose risks, which underscores the need to investigate the effects on environmental quality from the fires and floods.

The contaminants that will be examined include lead, aluminum, iron, manganese, copper, cobalt, nickel, zinc, cadmium, sulfate, arsenic, antimony, acidity, and dissolved solids. The study will also look at polycyclic aromatic hydrocarbons, which are byproducts of burned material, and perfluorinated compounds (PFAS), which are chemicals that have been used in industry and consumer products for many years – such as in nonstick pans and stain-repellent carpeting – and have been found to be highly toxic. Since these chemicals are being found in many locations, they are being included in the study.

This study focuses on characterizing contaminants and determining exposure risk so people can take action, and not on tracing the sources of the contaminants. This project also doesn’t include cleanup.

Monica said simple ways to reduce risk include taking shoes off outside so you don’t track material into the house, damp mopping instead of sweeping, and reducing the amount of dust generated from topsoil by mulching and planting.

The project will involve four goals:

1) Gathering information. The researchers will conduct a survey of local families about the impacts of post-fire debris flows and about people’s vulnerabilities and strengths on the individual and community level. People who complete the survey will receive a $10 gift card for their time, and it would take about 20 to 30 minutes.

Monica is also leading the establishment of a community advisory board.

2) Building capacity by training people on collecting environmental samples and interpreting data. People will be able to participate in the research as a form of community science, and local community health workers will be involved. Two individuals will be hired as community outreach assistants, through UA. These are paid positions.

3) Studying any contaminants that were released during the wildfires. Community participants can help by taking samples from soil, sediment and dust in and around residential areas. The samples will be taken over time, across the monsoon season.

Monica has already been working with the Town of Miami and has collected samples in nonresidential areas of Miami, including the wash. On October 15, samples will be taken in Claypool and Globe on public land, including in Ice House Canyon and near the Walmart and the hospital.

4) Sharing the data in such a way that everyone can understand and use it. The data will be made available in  hard copies and online, and solutions and strategies will be provided so people can prevent and reduce exposure.

During call to the public, Superintendent of GUSD Jerry Jennex pointed out GUSD is on the ballot on November 8 requesting permission to use school funds to enter into a long-term lease on currently held BLM land adjacent to ADOT and across the road from ADOT – about 135 acres in total. GUSD plans to build on the property, including a maintenance facility and other potential uses.

Molly Cornwell of the Downtown Association updated Council on sponsored events and programs. Molly highlighted the draw of Globe’s paranormal aspect and upcoming events in October, including the Ghosts of Globe tour and the Halloween event.

She said the 1915 Train Depot is seeing lots of use as an events venue, and one paranormal group recently found activity there. Molly noted the huge amount of filming that takes place in Globe, including music videos, TikTok videos and films. The crews often use the upstairs of the depot while other events are taking place downstairs.

Full minutes can be found by going to the City Hall website and clicking on Agendas/Minutes in the bottom left-hand corner. 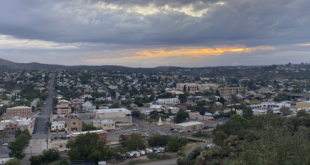