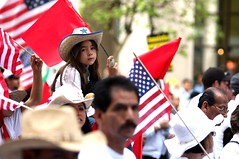 Musician and Mexican American, Little Joe, apparently evaded an Arizona law enforcement round-up of suspected illegal aliens after Globe’s big Cinco de Mayo celebration last Sunday night.  While on stage with his band, Little Joe y la Familia, Joe publicly acknowledged that he was born in Texas to parents who were illegal immigrants.  After admitting this, Little Joe peered out into the darkness, above the audience, perhaps expecting legal repercussions — in this latest era of Arizona disgraceful politics.
Remember Arizona’s recent past disgraces?  Martin Luther King Holiday rejection, Governors Evan Mecham & Fife Symington?  Well, the recently hatched immigration law takes the cake!  This law represents a new low for right-wing ideology in Arizona politics.  What an embarrassment for our great state!   This law actually requires law enforcement officers to confront any person who is suspected of being an illegal alien — and demand proof of citizenship.  What is the criteria used to determine if a ‘suspected illegal alien’ should be confronted?  Rest assured, this blonde-haired, blue-eyed white boy(me) is not a suspect.

How about we call sin by its right name — racial profiling IS the criteria. Brown skin, Latin language, Hispanic appearance…  Why can’t Republicans and racists (I am not asserting that ALL Repubs are racist) just state plainly and publicly that racial profiling is a legitimate law enforcement tool.  They believe it.  So-called ‘conservatives’ like to scoff at the notion of ‘political correctness’ — so, why are they cowardly about their belief in racial profiling?  Shame on our Arizona Republican Legislators and Governor!  What hypocrites and cowards!  How dare they try to mask racial profiling as a benign, legitimate tool to stop illegal immigration!

Little Joe interjected a bit of American History during Saturday night’s musical fiesta when he playfully suggested that the wall being erected on the Mexico/U.S. border should have been built 400 years ago by Native Americans…to keep out the illegal European immigrants who brought violence, disease, & devastation to a continent.

This new Arizona law is an overreaction to a problem that has been festering for decades, but has come to a boil during extremely tough economic times in the USA.  Inevitably there are scapegoats.

As one listens to the music and life story of Little Joe, it reminds of the contribution of immigrants to American life — and, it deepens the  realization that each of us descended from folks that were once-upon-a-time called ‘immigrants’ — perhaps illegal to boot.  If Governor Brewer could trace her family tree back to the Mayflower immigrants,  she would be a descendant of boat people willing to risk everything in search for a better life.  Colonists during the 17th Century — some of America’s earliest illegal immigrants — are also our history book heroes!

Instead of resorting to the unconstitutional act of racial profiling to fix illegal immigration, we, as a society who claim superiority in upholding human/civil rights, should be looking for solutions that respect individual dignity and protects civil liberties.

Such a comprehensive immigration plan was crafted a couple years back by U.S. Senators John McCain and Ted Kennedy.  Yes, this was back when McCain was sort of the ‘Maverick’ he claimed to be.  Today, McMaverick has flip-flopped in trying to prove that his ‘conservative’ credentials are superior to primary election opponent, J.D. Hayworth.  A show of true statesmanship by McCain might have moderated Arizona’s Republican Legislature and Governor.  Not to be.  McCain sold his soul to the Right.  Arizona legalized racial profiling.

In an attempt to find a silver lining, some citizens say that just maybe this radical immigration law will force Uncle Sam to finally address the ‘border problem’.  To that, I say — we must never sacrifice civil liberties for political expediency.  Rational solutions to deal with illegal immigration exist.  The question is — do we have the decency and political will to enact constitutional, comprehensive immigration reform?

Just like Little Joe y la Familia — hispanic citizens all across Arizona who continue to serve their country during war or peace — have been put on notice to be ready to show proof of American citizenship.  Racial profiling leads to second-class citizenship.  So, stand tall Arizonans — brown, black, red & white — be like Little Joe!  Fight discrimination by educating & inspiring fellow citizens to join you in VOTING OUT OF OFFICE every single politician who supported the legalization of racial profiling in Arizona.

Share
Previous What history writes about the Apache Kid
Next Globe-Miami Mexican Restaurants: A Tale of Four Sisters